Pocket has the ability for node runners to set up their nodes to run with “non-custodial” staking. This means that the Pocket address that is associated with staking and running the node is not the recipient of the funds once the node is unstaked.

Custodial staking is the process of having the operator of the node be the recipient of the rewards of that node. This is true regardless of whether the node is a servicer or a validator.

In this scenario, only one Pocket account is needed to run a node. This account handles all aspects of node maintenance such as staking, editing the stake, unjailing, and unstaking.

Prior to activation of non-custodial staking, this was the only option that node runners had.

Non-custodial staking is the process of having the operator of the node be a different account from the account that receives the rewards.

In this scenario, there are two Pocket accounts necessary to the staking of a node: the operator account and the output account.

Both the operator and output accounts can perform the staking and also any and all node maintenance (unstake, unjail, etc.).

The output account can’t be changed after staking, so it is vitally important to both make sure your output account is set correctly in the staking command, as well as to ensure access (keys) to that output account.

Failure to do both of these tasks will result in all rewards and staked funds being sent to an inaccessible account and lost forever! It is not possible for the operator account to receive staked POKT or rewards in a non-custodial configuration. 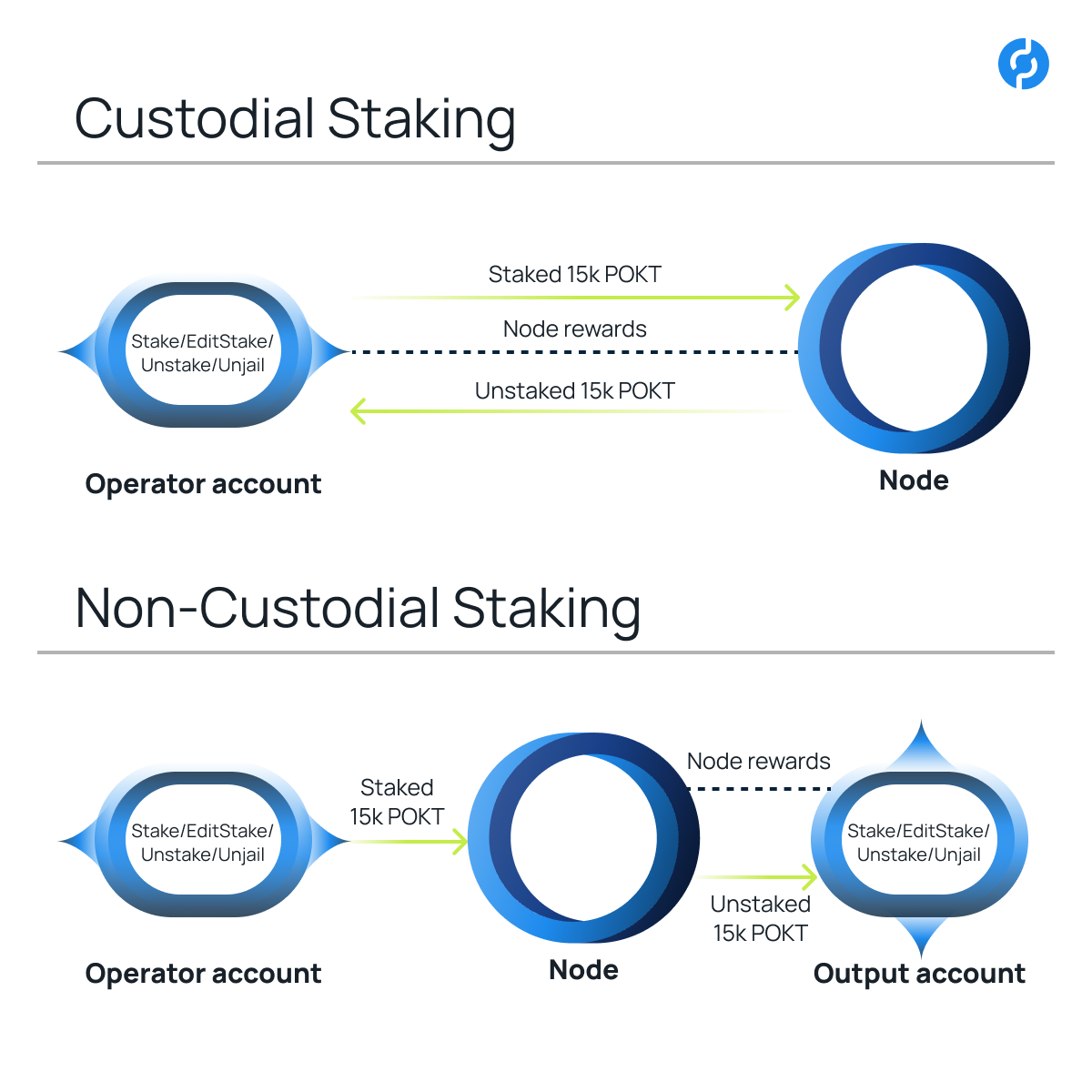 An operator address must reside in a “hot” wallet on the node. This could potentially represent a security risk when the server is operated by a third-party. As third-party node hosting is common, there has arisen a need to have the recipient wallet for rewards not be on the same server as the node.

Non-custodial staking allows for this scenario. All you need to specify is the wallet (“output”) address, which is denoted when staking the node. The wallet can reside off the server.

Another benefit to non-custodial staking is the ability to pool rewards into a single account. Since each node has to have a distinct operator account, this would previously have resulted in rewards being split across multiple wallets, which is inconvenient for a node runner with many nodes.

The command for staking a node was updated when non-custodial staking was activated. Please see below for the updated command syntax.

Some notes on these commands:

For more information on the full usage of these commands, including all parameters, please see the Pocket Core docs.

Any Pocket node command successfully issued (for example, to adjust the stake) will “lock” the node into custodial, unless a non-custodial command is issued with a valid output address. Following this, the only way to switch between custodial and non-custodial is to unstake/restake the node (and recall that there is a 21 day unstake period).

Important for all nodes

Make sure the operator account has some POKT left after staking, as it will still be responsible for ongoing claim and proof transactions, which each carry a 0.01 POKT transaction fee.

The unstaking process is the same using custodial or non-custodial staking.

During the unstaking process, a transaction is not generated when sending the staked POKT to the output address. This is intended behavior, and is similar to how proofs work on the blockchain.

In order to verify that your POKT is where it should be, we recommend querying the blockchain directly, instead of relying on a block explorer service that may not interpret the results accurately.

You can use the interactive API Docs to query the balance for an address at a given block height. Try it here.